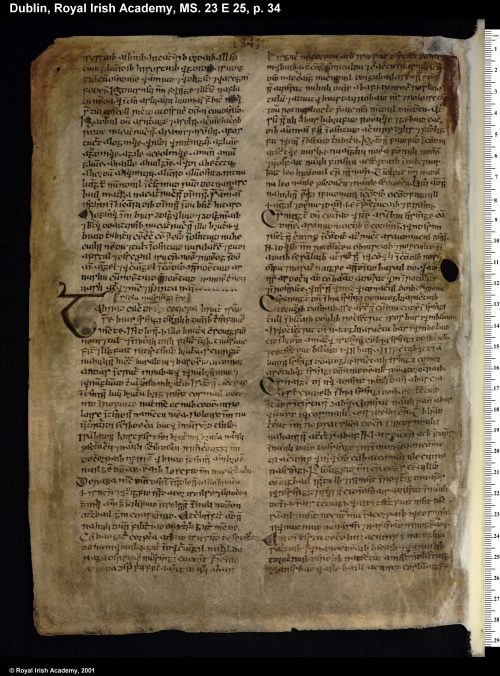 ‘Eschatology’ refers to beliefs about the end of time, the fate of the soul, post-mortem judgement and the nature of the afterlife. I wrote my PhD thesis in 2008 on the subject of ‘Medieval Irish Eschatology: Sources and Scholarship’ and since then have published a number of studies – some of which are available here (following the links on this page) – on various aspects of eschatological belief in medieval Ireland.

The manuscript image here shows the opening of an eleventh-century Irish eschatological text called Scéla na esérgi (News of the Resurrection) which is a discussion of the nature of the human body at the Last Judgement. It is preserved in a manuscript called Lebor na hUidre (The Book of the Dun Cow). The fullest study of this manuscript can be found in the book edited by Ruairí Ó hUiginn. This image from the manuscript is reproduced by kind permission of the Royal Irish Academy and the Irish Script on Screen project hosted by the Dublin Institute for Advanced Studies.